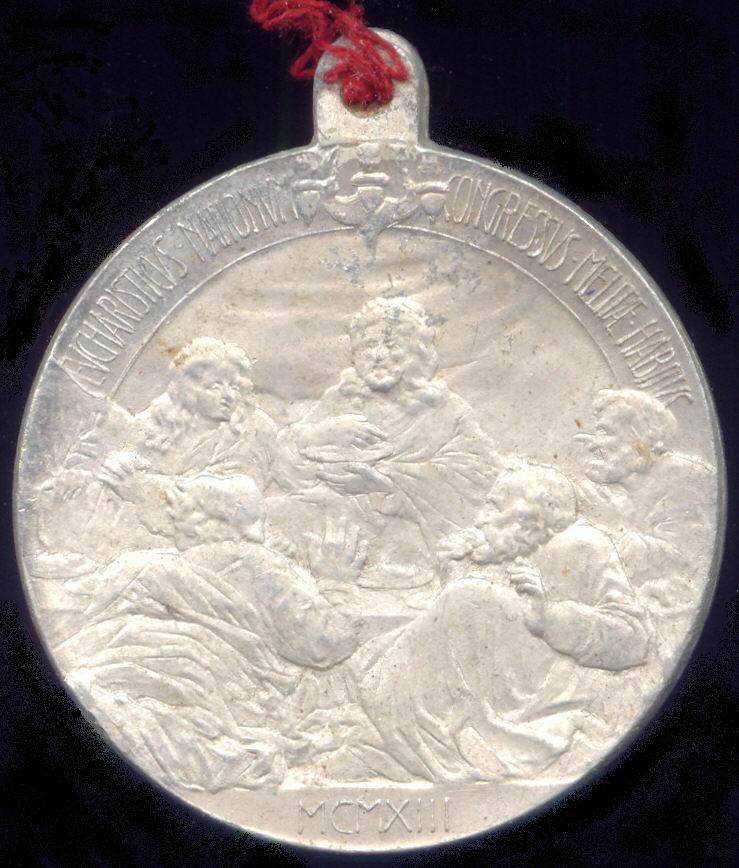 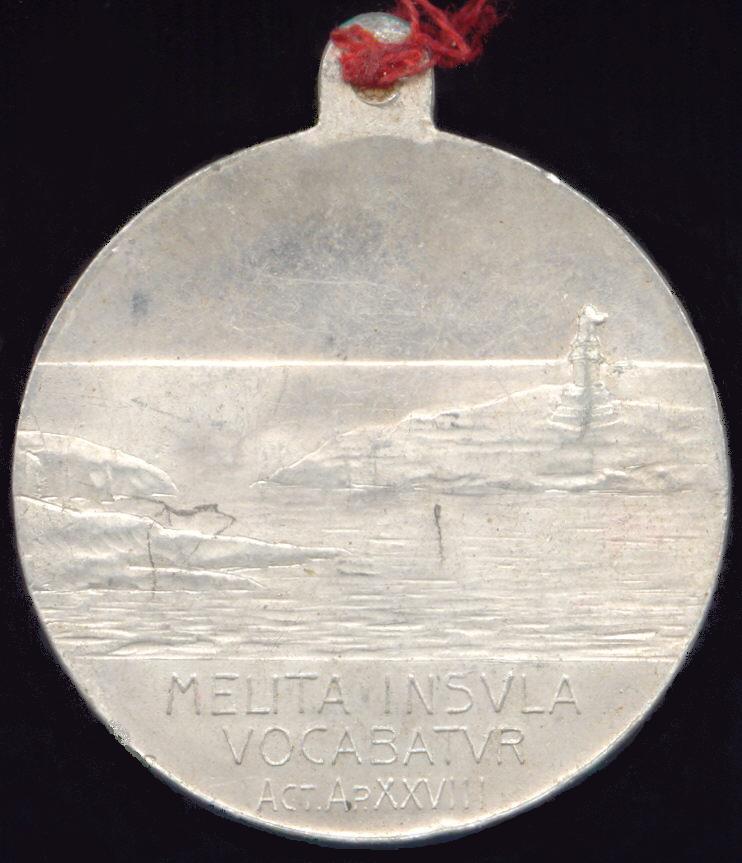 This was the official medal issued by the Executive Committee

The first International Eucharistic Congress was held at Lille, France on the 21st June 1881 following an idea conceived by Bishop Gaston de Ségur.

It is a gathering of clergy, religious, and laity from a wide area to bear witness to the real presence of Jesus in the Eucharist, this being a crucial dogmatic landmark of the Roman Catholic Faith.

A congress typically involves several large open-air Masses, adoration of the Eucharist (Blessed Sacrament), a solemn procession and other devotional ceremonies held over a number of days.

The first few years saw the project grow from a local event to one of an ever-increasing importance with the 6th congress being held at the great memorial church of the Sacred Heart on Montmartre in Paris between the 2nd & 6th July 1888.

In the 7th Congress, held at Antwerp, Belgium between the 15th & 21st August 1890 it is estimated that some 150,000 persons were gathered around a purposely erected immense altar of repose in the Place de Meirfor the solemn Benediction by Cardinal Goossens, Archbishop of Mechlin in the Place de Meir.

At this time the Permanent Committee for the Organization of Eucharistic Congresses was presided by Bishop Doutreloux of Liège. This Committee had the responsibility of keeping records pertaining to the proceedings and results of these meetings.  After each congress it prepared and published a volume giving a detailed report of all the papers read, respective discussions and settings, the sermons preached, the addresses made at the public meetings, and anything else considered of value or importance.

Another significant congress was the 8th, held in Jerusalem in 1893. This was the first to be held outside Europe.

It is interesting to note that at the 1907 congress held in Metz, Lorraine, the German Government had to suspend an 1870 law forbidding processions in order to allow the important solemn procession of the Blessed Sacrament to be held.

The popularity of the congress  grew rapidly and at the invitation of Archbishop Bourne of Westminster the 19th congress was held in London, the first among English-speaking members of the Church. By this stage the congress had attained a proper international status. 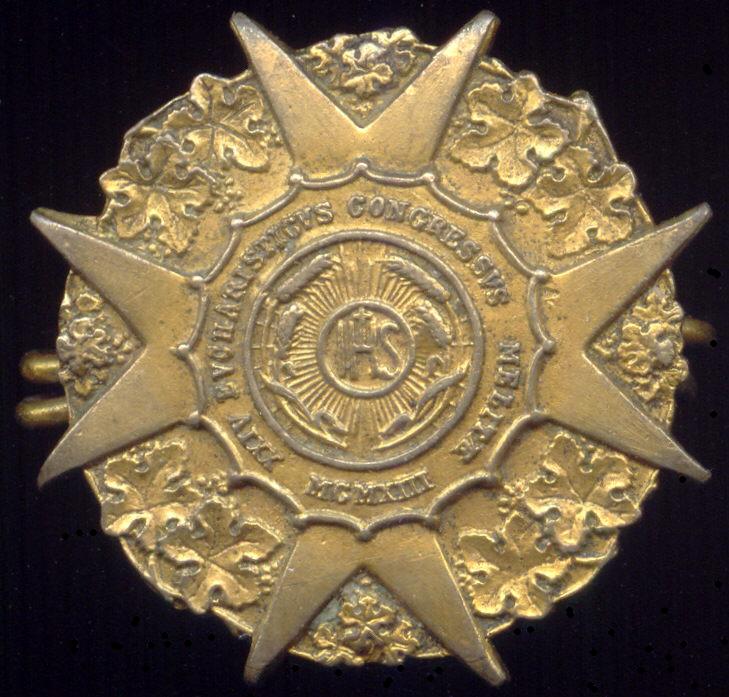 Above: Another Maltese 1913 Congress commemorative brass pin, given as a token to all those who purchased a copy of the 'Vademecum' - 31mm Ø with Latin inscription:

The 24th International Eucharistic Congress held in Malta between the 23th & 27th April 1913 was the last of its type.

It was presided by the Pope's Cardinal Legate D. Ferrata (Pref. S.C. Sacr.) who was ferried to Malta from Syracuse by HMS Hussar, leaving Sicily at 10am and entering the Grand Harbour at 4pm sharp.

The Hussar was originally a torpedo gun boat launched in 1894, converted to a yacht and despatch vessel for the Royal Navy's Commander-in-Chief, Mediterranean in 1907. When war broke out in 1914 it was converted again, this time as a minesweeper.

In February 1915, Commander Edward Unwin took command of the Hussar. For the landing at Cape Helles, 25 April 1915, Unwin took command of the SS River Clyde. Unwin won the Victoria Cross for his actions during the landing, as did two of his crew from the Hussar who were also on the River Clyde, Able Seaman William Williams and Seaman George Samson. Hussar was initially sold in December 1920, but was resold on 13 July 1921 to L. Gatt, of Malta for breaking up.

Back to the Congress, just like the preceding 23 editions, it mainly focused on procedures relating to the Eucharist “Oeuvres Eucharistiques” being the cult of adoration, processions, Holy Communion (particularly of children), the Sacrifice of the Mass, Eucharistic associations and movements.

As from the 25th Congress of 1914, held in Lourdes, France, specific themes were introduced, with each congress being focused on a particular aspect. Hence the 1914 Congress was given the title

"The Eucharist and the Social Reign of Jesus Christ"

It was the last held under the reign of Pope Pius X who died just a month less 2 days later. World War I then got in the way and congresses only resumed in 1922.

The 1922 Congress was themed

"The Peaceful Reign of Our Lord Jesus Christ in the Eucharist"

and was presided by newly elected Pope Pius XI in person.

In 1938, celebrations were held to commemorate the 25th anniversary of the 1913 Congress held in Malta. The image below shows the commemorative brooch issued for this occasion. 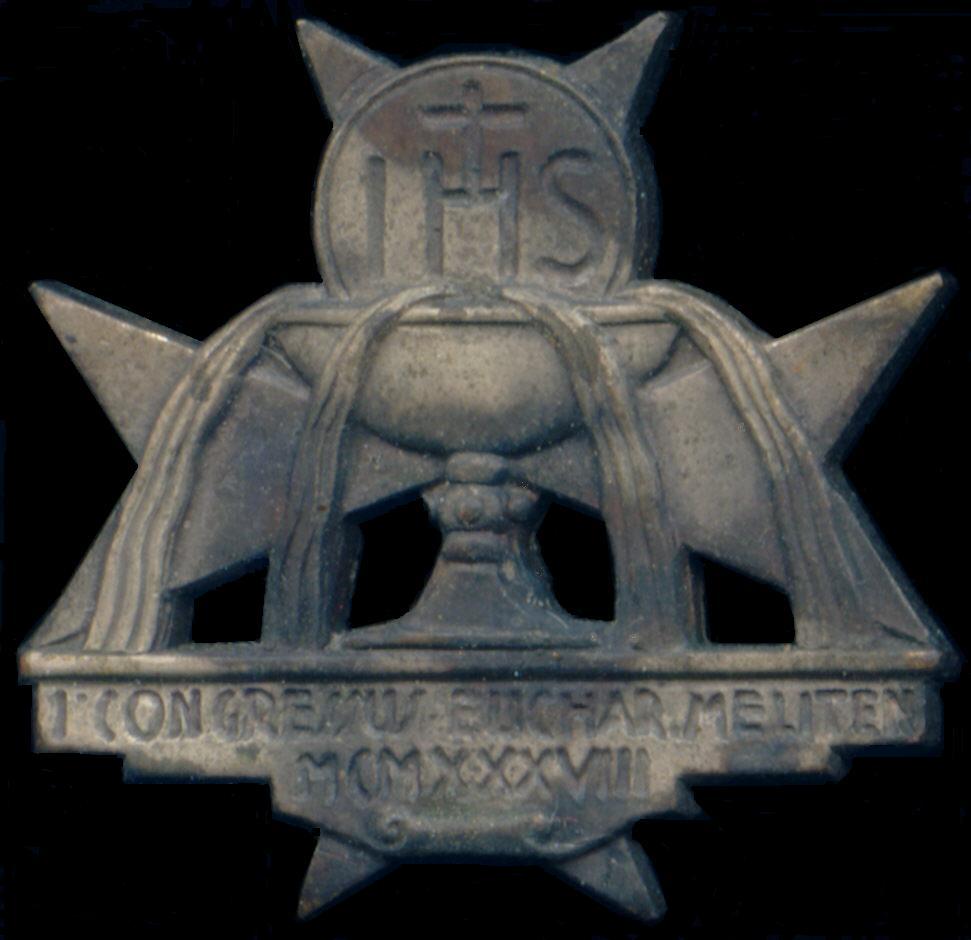 The 50th International Eucharistic Congress is scheduled from June 10th to 17th 2012 and shall be held in Dublin, Ireland. It also coincides with the 50th anniversary of the inauguration of the Second Vatican Council of 1962.

To read more about this, kindly follow this external link:

The Archaic Archives contain more related items that are currently being listed, scanned and documented for subsequent uploading

BACK TO  EVENTS PAGE