The need for humans to keep warm and to protect their bodies from external elements has always been and remains one of the most basic fundamental aspects of the species.
Mankind's quest for survival required humanity to explore the Earth and move around in search of territories better-suited for the fulfilment of other basic needs such as finding food and water.
Changing weather climates and other factors resulted in mass migration through prehistory and the necessity to adapt to very cold or hot environments across the globe.
It is currently believed that the practice of adapting materials such as furs, leather and vegetation for protection against the elements started around 170,000 years ago and would persist until Man's nomadic hunter-gatherer status evolved through civilisation.

Before the Age of Civilisation, Mankind resorted to leather, furs and vegetation to keep warm

The earliest evidence of humans using fibres from wild flax plants to make linen-like fabrics goes back 36,000 years. However it was only around 10,000 years ago when the foundation of communities and domestication of plants and animals revolutionised textile production.
The evolution of husbandry and agriculture led our ancestors to cultivate plants for their fibres, extract wool from animals, and develop better methods to produce textiles from these materials.
Evidence of such fabrics elaborated from domesticated resources goes back to the 6th and 7th centuries BC, whereas cotton spinning dates to around 3,000 BC.
Further evolution over time led to the discovery of new materials and methods for textile production, eventually culminating in the creation of artificial fabrics in the 20th Century AD.

From a local perspective, archaeological evidence shows that the use of textiles goes back to the prehistoric era. The manufacture of fabrics has been long been associated with the Islands and attested as one of the foundation stones of Maltese Industry.
When the Phoenicians established a trading colony here in around 750 AD, they brought all sorts of goods with them, including textiles. This Punic culture was renown for its proficiency in the elaboration of fabrics and their widespread trade of such materials. It was under their administration that the local manufacture of textiles grew into a proper industry.

Hesychius of Alexandria1 made reference to Maltese textiles for the first time in the 6th/5th century AD, while Callimachus2 was the first Greek poet to mention Maltese textile products during the 3rd century BC.
Some two centuries later, another Greek, Diodorus Siculus3 describes the Maltese as excelling in several arts, particularly the manufacture of cloth remarkable for its softness and fineness.
Roman authors from the 1st century BC such as Marcus Terentius Varro4 and Silius Italicus5 similarly make mention of such wares.

Varro wrote about a Maltese 'mitra'6 while Silius concurs with Diodorus when it comes to quality in saying that the Maltese were proud of their 'tela-lanigera', both these terms referring to textile products.
None of the above mentioned authors or others from the period make specific reference to what material was used, however prehistoric remains and careful attention to the original terms employed indicate that it was linen they had in mind.
Linen is a strong, breathable and absorbent material made from fibres extracted from the inner part of the flax plant. The term derives from the plant's Latin name, Linum, and the earlier Greek Linon.

Before being granted the status of a Roman Municipium, hence its own local administration, Malta formed part of the province of Sicily. A dispute occurred when Caius Verres, Praetor of Sicily7 between 73-71 BC was denounced for several abuses to the detriment of our ancestors.
Marcus Tullius Cicero8 accused Verres on several counts of corruption and misconduct, which included turning Melite into a textile factory and carrying away immense quantities of Maltese cloth.

After the fall of Rome in the 6th Century AD, the Maltese Islands came under the jurisdiction of the Byzantine Empire until 870 AD, when the archipelago was taken over by the Arabs.
This led to a revolution in the agricultural sector in the form of improved irrigation techniques, landscaping, and the establishment of several orchards and plantations.
As a result of these initiatives, the Arabs founded a vibrant cotton industry which would endure well beyond their tenure of the Maltese Islands.
The word cotton is part of that legacy and derives from Arabic qutun / qutn. (Maltese: Qoton)
Cotton is a soft, supple base fibre almost entirely made of cellulose which grows in Gossypium shrubs in the tropical and sub-tropical regions of the world.
Its fibre has been converted to yarn and used to produce soft, breathable fabric since prehistory, with archaeological evidence of this process going back to at least 6000 BC.
There are four different species of the cotton plant that have been domesticated since antiquity and are still commercially cultivated in today's world.

The Arabs brought about an Agricultural Revolution to the Mediterranean, establishing a thriving cotton industry

Cotton was originally hand-woven on a loom, which is a device used to weave cloth.
The introduction of the spinning wheel to Europe in the 1350s greatly improved the speed of cotton spinning. Cotton takes less time to harvest and is easier to weave than linen, so it is no surprise that the local industry switched to the former as its primary interest.
Written records from the Aragonese period bear witness to a flourishing trade and large-scale exportation of Maltese cotton. The extent and importance of this sector is defined by a decree from the 1470s raising the tax on exported cotton by two percent with the proceeds being assigned to the upkeep of Mdina's defensive walls. The trade was regulated further in 1492 with the establishment of a commission for controlling prices and levying taxes on spun material. 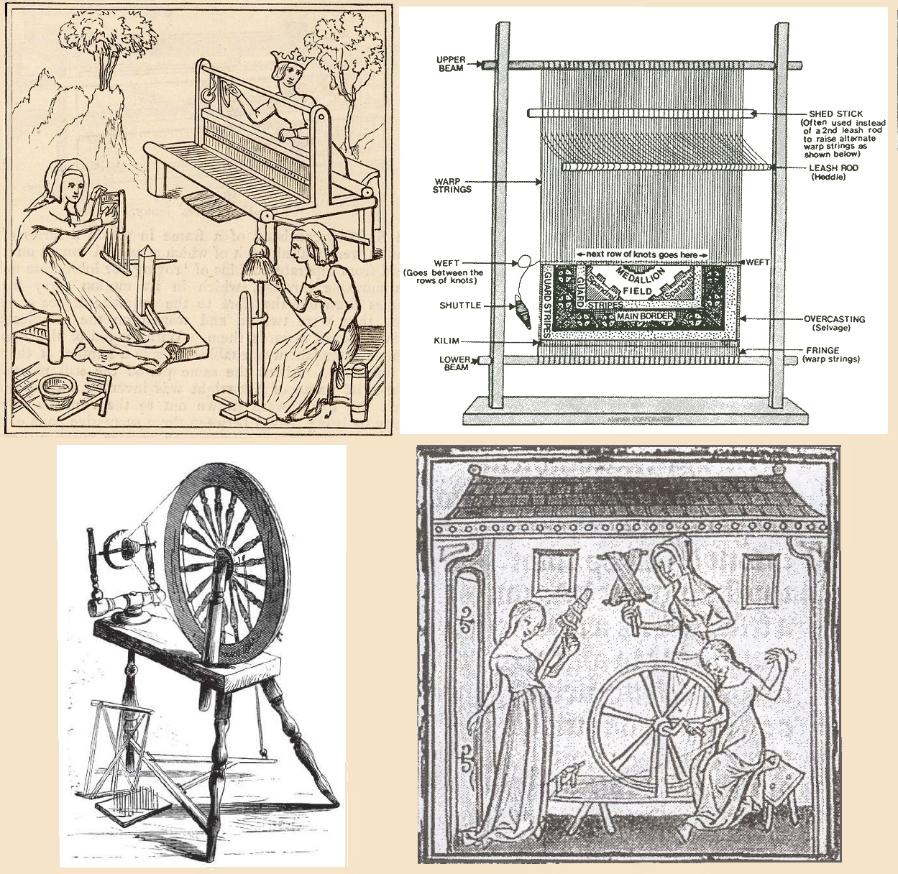 Evolution of Weaving Devices during the Medieval Period

When the Order of St. John were granted control of the Islands, their historian Giacomo Bosio stated that the Maltese were fully attired in garments made from locally grown cotton, adding that this commodity thrived greatly in Malta. The Order fully recognised the importance of this industry and took various measures to ensure its progressive success, including reforms in taxation and quality control. While the production of Maltese cotton brought much wealth to the country and fuelled local employment, it did come at a cost. Growing demand from abroad led many farmers to cut down the trees on their land in favour of cultivating cotton. This included the destruction of several olive tree plantations from Roman times as well as citrus orchards from the Arabic period.

Malta was duly taken over by Napoleon's republican army in 1798 and by the British in 1800, whereby it became a Crown Colony in 1813. Both these administrations took steps to ensure the survival of the cotton industry, before it eventually dwindled due to a number of factors.
The establishment of extensive cotton plantations in several foreign countries and new trade routes through the 19th century led Maltese manufacturers to mix local cotton with inferior material leading to a drop in quality and demand. A steady decline followed and there was little left of the industry by the time synthetic fibres were invented in the late 1920s.

Another aspect of the textile industry in Malta concerns the manufacture of lace.
More details soon...