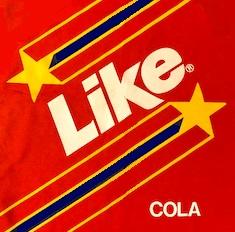 Like Cola is a low-caffeine cola-flavoured soft drink introduced by the 7-Up Company in 1982 after the firm, founded by Charles Leiper Grigg in 1929, was sold to Philip Morris Companies Inc.1
It was originally available in partially embossed clear glass bottles and red & blue cans.
The use of the term 'like' was originally adopted by the 7-Up Company between 1963-1969 for a diet-version of its lemon-lime soda, before being rebranded simply as Diet 7-Up.
The cola also had its low calorie version marketed and sold as Diet Like Cola. 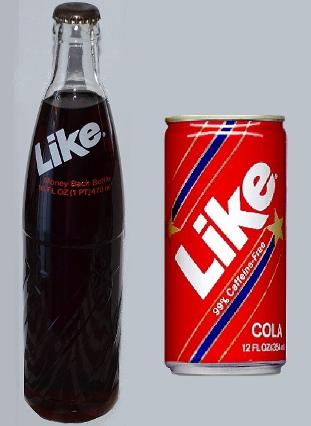 The first Like Cola Bottles & Cans were introduced in 1982

Shortly after its launch in the USA in 1982, Portainer Bros Ltd acquired the franchise and launched Like Cola on the Maltese market as a rival to Coca-Cola and Pepsi-Cola. It was originally sold in glass bottles and manufactured by Portanier until the firm's dissolution in 2002. Both the 7Up and Like Cola franchises were then re-acquired from PepsiCo International by Simonds Farsons Cisk Ltd.

Notes & References
1. Philip Morris Companies Inc. was an American Tobacco Manufacturing & Marketing Corporation. It resold the International Division of the 7-Up company to PepsiCo and the American Branch to Hicks & Haas in 1986.
--